Members of the Historical Society have begun work on a new exhibit telling the story of residents from Haddonfield and vicinity who served in World War I, as well as the story of life on the home front during the war years.

The exhibit will open on Sunday November 5 and continue through Friday December 8, 2017.

The exhibit will feature three World War I uniforms from the Society’s collections, as well as scrapbooks, photographs, newspapers, flyers and posters that were meant to motivate the folks at home. Stories and items from some of those who served highlight the impact of the war on participants and their families. 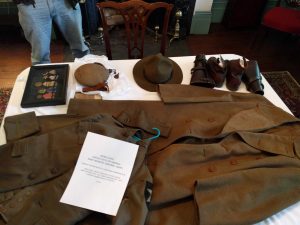 On the opening day of the exhibit, we’ll be holding a special collaborative open house with our neighbors at the Indian King Tavern. At the Historical Society, view the opening of our new exhibit and make a replica of the gold medal presented by Haddonfield in 1919 to residents who served in World War I. At the Indian King Tavern, learn about the Revolutionary War and the role of the community in hosting the state Legislature. There, you will have the opportunity to make a Badge of Merit, the precursor to the Purple Heart that was designed by George Washington.

We’ll be hosting special Saturday hours for the exhibit (and the rest of Greenfield Hall’s exhibits) the weekend after Veterans Day.

We’ll be hosting special Saturday hours for the exhibit (and the rest of Greenfield Hall’s exhibits) the weekend after Thanksgiving during “Small Business Saturday.” Come learn why HMHS is a “memorial” school, and explore the collection materials on display.

Greenfield Hall will be open for our usual First Sunday hours from 1-3 pm. The World War I exhibit will close the following week, with the last tours available on Friday December 8.