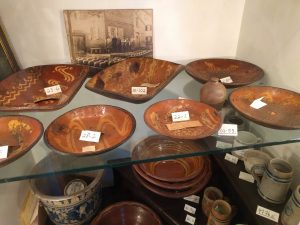 Greenfield Hall visitors will find our period rooms appointed with local and regional furniture and fine arts dating from mid-18th century to the early 20th century. Highlights among our permanently displayed collection are two pieces of furniture which belonged to Elizabeth Haddon Estaugh, Haddonfield’s legal founder: a marble-topped table and a Queen Anne pier mirror which Elizabeth had shipped from England for her home here in the early 1700′s.Four tall case clocks, each with 8-day movements and interesting provenance, range in age from circa 1760 to 1820. Three are located on the first floor; the fourth is found in the second floor hallway. A pair of Queen Anne chairs set off a Chippendale tilt top tea table from Philadelphia. In the west dining room, a copper hot water urn used in the Haddonfield Friends Meeting House rests atop a mahogany Empire sideboard. Examples of horsehair upholstered furniture are displayed in the Victorian Parlor along with a rare and extremely large hair sculpture.

Lithographs of George Washington grace the spaces above our two Yorkshire marble fireplace surrounds. Period needlework, including mourning and friendship work, are on exhibit, as well as a collection of Haddonfield pottery made here from circa 1816 to 1950. Southern New Jersey was home to several glassworks in the 18th and 19th centuries. Examples of the slightly green tinted glass include a flip glass and end-of-the-day fanciful bowls.

The second floor bedroom and the early 20th century indoor bathroom featuring porcelain fixtures from Trenton, NJ. Many other objects, such as the 18th century leather fire buckets from Haddonfield’s Friendship Fire Company and the works of local artists decorating our shelves and walls, beckon you to come and learn more of our local history.