History of the Historical Society

Haddonfield, NJ, a small town located eight miles from the city of Philadelphia, has a long history that has been treasured and cared for by many generations of residents. In October of 1913, a group of those residents decided to honor the “Two Hundredth Anniversary of the Settlement of Haddonfield”, celebrating the erection of New Haddonfield Plantation by John and Elizabeth Haddon Estaugh in 1713 as the settlement date of the town.

On October 18, 1913 Haddonfield and vicinity witnessed a great celebration of the town’s bicentennial. Chaired by Samuel Nicholson Rhoads (a collateral descendant of Elizabeth Haddon Estaugh), James Lane Pennypacker and Julia Bedford Gill, the celebration included the presentation of papers on the history of the town in the Haddonfield Friends Meetinghouse, the erection of a tablet to the memory of Elizabeth Haddon Estaugh in the Friends Cemetery, an exhibition of documents and historical artifacts in the Artisans Hall, and in the afternoon a series of historical tableaux on the lawn of the Samuel Wood house, the original site of New Haddonfield. The attendance for the events numbered well over 6,000.

In researching the history of the town, the organizers realized that there were documents and other memorabilia still in the community. They felt strongly there should be a way to preserve these items within the community for future generations and determined that establishing a local historical society would be the best way to insure the survival of these materials.

Julia Bedford Gill, the wife of Ephriam Tomlinson Gill, a descendant of two of the most important founding families, is credited with being the moving force behind the project. She had a great deal of support and assistance from her two co-founders, Samuel Nicholson Rhoads, a descendant of several early families, and James Lane Pennypacker, a descendant of a prominent Pennsylvania family. Both of these men had the advantages of great educational background and long-standing interest in history, particularly the history of Haddonfield and of southern New Jersey. Under the sponsorship of these three, a group of forty-six citizens with an interest in local history met at the Indian King Tavern to study the feasibility of establishing an historical society in Haddonfield. The Organizational Meeting of the Historical Society of Haddonfield, New Jersey took place on November 24, 1914 at which time a Constitution and By-Laws were recommended and adopted.

“The object of this Society shall be the study of the History of the Borough of Haddonfield, the County of Camden and the state of New Jersey; the study of organizations, societies, families, individuals and events; the collection and preservation of articles of historic value; the establishment and maintenance of an historical library; and the publication, from time to time, of such historical information as may be deemed expedient.”

Led by Ephriam T. Gill, the first president, the Society quickly followed its plan of amassing the materials of the early history of the area, establishing committees to both go out and copy the early records of marriages, deaths and early organizations and to arrange for proper storage of the materials gathered from local donors. The Society began with a total of 137 Charter Members who were committed to the goals of the new organization. Annual dues were $1.00 with a Life Membership of $20.00. 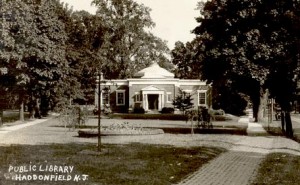 In 1915 the Historical Society began working towards the erection of a building which would accommodate their archives and collections and provide a home for both Haddonfield Library Company (1803) and the Haddonfield Free Public Library collections, a daunting undertaking. The project was given the property at the intersection of Haddon Avenue and Tanner Street by Rebecca Nicholson in October of 1916 and began construction of a building for the joint use of the library and historical society in 1917. Due to the hardships of World War I the building was not completed until 1919 when the Historical Society and Public Library were able to move into the new building. 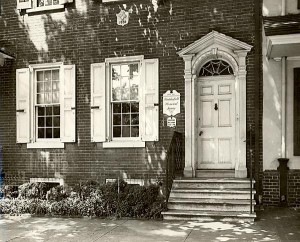 Unfortunately the joint Historical Society and Public Library building was quickly being outgrown by both organizations. By 1936 joint use of the building had become impossible and the Historical Society had begun to look for a new location. On February 22, 1938 the Society formally opened its new headquarters at 231 Kings Highway East, one of three attached brick homes built in 1836 by Judge John Clement for his three daughters. Located next to the Indian King Tavern, which served the community as something of a “club house” as well as a NJ historic site, the location seemed fortuitous.

The Historical Society successfully continued its work of acquiring the documents and artifacts of Haddonfield History, mounting displays, issuing publications, and offering educational programs to both adults and school children from this location until 1958 when it was again outgrowing the space available at 231 Kings Highway East. At that time the Society was offered the opportunity of purchasing Greenfield Hall from Harry and Sylvia Bauer who were willing to sell their beautiful and spacious home to the Society at a lower cost than the house would have commanded on the open market. The Executive Council, led by local architect and Society President, Herbert R. Leicht were anxious to accept the generous offer of the Bauer family. Through pledges, increases in membership fees and proceeds from the sale of both the property at 231 Kings Highway East and the final buyout of the Society’s interest in the original Library Building on Haddon Avenue, the purchase of the spacious Greenfield Hall property was executed. Dedication of Greenfield Hall as the new headquarters of the Historical Society took place on February 28, 1961. 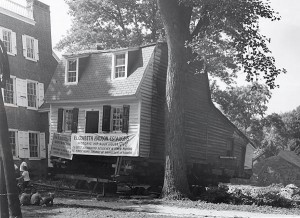 In 1965 the Society completed its architectural endeavors when it moved one of the earliest structures in town, the early 1700′s Samuel Mickle House, also referred to as the “Hip Roof House”, to the grounds of Greenfield Hall. Originally intended to function as a museum building which would act as an example of the earliest homes in the town and the furnishings associated with that period, it was pressed into use as the Library of the Historical Society in the 1990′s when the burgeoning library collections outgrew their original two rooms in Greenfield Hall.