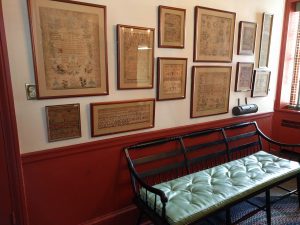 Historic textiles provide museums with a profound source of the past as our most fragile documents. Here at the Historical Society of Haddonfield, we house a broad spectrum of textiles ranging from flats to costumes. Keep in mind our mission which allows us to access items pertaining to Haddonfield, N.J. and its environs.

Because of a textile’s fragile nature, our collections are rotated through an exhibit schedule and are not on permanent display.