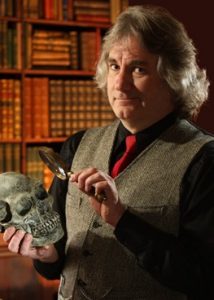 The Society’s next General Membership Meeting will be held on Wednesday November 16 at 7:30 pm. Dr. Brian Regal of Kean University will be presenting “The Real Jersey Devil.” The event is free for members, with a suggested donation of $5 for non-members.

Due to anticipated interest, we’ll be gathering for this event only in the meeting room at the Lutheran Church of Our Savior, 204 Wayne Ave., Haddonfield.

What is or was the Jersey Devil? The actual thirteenth child of Mrs. Leeds, cursed by her to be the spawn of Satan after the burden of bearing twelve other children, or a silly backwoods superstition? Does it bear the features of bat and kangaroo, or is it more like a winged goat? Does it slaughter dogs and pigs and even its own mother, or is it a harmless tale told to add a thrill to Pinelands camping trips? What are the facts behind its birth and how has it lived so long, with sightings still occurring to this day?

According to Dr. Regal, the story of the Jersey Devil is far more important and interesting than the details of its appearance or its authenticity. “The problem is that everything you think you know about the Jersey Devil is wrong,” says Dr. Regal. “It is not about a spectral winged horse, demon, but rather the bare-knuckled political and religious upheavals and fights of colonial America. The real story of the Jersey Devil’s birth is far more interesting, complex, and important than anyone thinks. It is a product not of witchcraft, but innuendo, scandal, rumor mongering, and media hype. It illuminates a forgotten part of American history. “

Dr. Regal teaches the history of science, technology, and medicine at Kean University. His interests are wide-ranging, including how the fringe and mainstream in science interact. In 2013, he published Searching for Sasquatch: Crackpots, Eggheads and Cryptozoology, exploring the lives of mainstream scientists who believed seemingly far-fetched creatures like the Sasquatch and Yeti were real animals, not simply the products of folklore or hoaxes. He has shared his research in venues ranging from academic journals to the History Channel series “True Monsters.” He has collaborated with Kean University colleague Dr. Frank Esposito on a new book, tentatively titled Satan’s Harbinger: The Real Story of the Jersey Devil, scheduled to be published this spring.

Hope to see you the 16th for this intriguing presentation!

The Historical Society is your place for spooky fun this October! Don’t miss out on this year’s Haunted Haddonfield Walking Tours and Haunted Mansion:

Join us on a walking tour of Old Haddonfield as author William Meehan, Jr. regales us with ghost stories and legends from his popular paperback, Haunted Haddonfield.

The tour begins at 7 pm at Greenfield Hall and winds past the cemetery and familiar homes along the way. The tour lasts about 60 minutes and can be enjoyed by everyone: couples, groups, and families.

Tickets are $10 for adults and $5 for children under 12. Tours will be held on the following dates:

Tickets can be purchased ahead of time at the Historical Society during open hours, at the Haddonfield Public Library, and at the Visitors Center. Tickets will also be available at the door (cash only) as space allows.

The Society will host its annual Haunted Mansion right after the town Halloween parade. The event should be a spooky good time for older children and families.

The cost is $3 for children and $5 for adults. Tickets will be available at the door.

You can learn more about the Halloween parade, organized by the Haddonfield Celebrations Committee, at www.haddonfieldcelebrations.org

Our next general membership meeting will be held on Wednesday September 28 at 7:30 pm at Greenfield Hall, and will feature a presentation by Lucienne Beard on “Alice Paul: New Jersey’s Heroine for Equality.” Beard is executive director of the Alice Paul Institute in Mt. Laurel, and the presentation and discussion will feature original photographs from her personal collection, explore Alice Paul’s life, her roots in the New Jersey Quaker community, and her work for women around the world.

Who is Alice Paul? That’s a question few would have needed to ask in the early twentieth century when she was at the forefront of the women’s suffrage movement. Organizer of some of the most prominent and contentious suffrage rallies, founder of the National Women’s Party, author of the original Equal Rights Amendment, she was a figure constantly in the public eye. Her clashes with those both in and out of the movement and her outspoken support of women’s rights resulted in imprisonment and worse, but also made her “what Gandhi was to Indian independence and Martin Luther King was to civil rights,” according to her biographer, Mary Walton.

Despite a life devoted to gender issues and equality even after women were finally granted the right to vote, her fame waned and she was largely forgotten at the time of her death in 1977 in Moorestown, NJ. But she has finally begun to receive her due: she will appear on a new $10 bill along with other pioneers of women’s rights, a Google doodle marked her birthday, and the headquarters of the National Women’s Party has been recognized as a national monument.

The Alice Paul Institute in Mt. Laurel has spearheaded this overdue appreciation of her impact. Headquartered at historic Paulsdale, the “home farm” of the Paul family, the Institute seeks to honor Paul’s legacy by working to achieve full gender equality worldwide.

As we approach the 100th anniversary of the passage of the Nineteenth Amendment granting American women the right to vote, Alice Paul’s work to this end and beyond is even more relevant and significant. It is fascinating to explore its roots here in South Jersey and nearby areas along with the efforts and trials she endured extending the courage of her convictions worldwide in ways that continue to resonate. Please join us at Greenfield Hall on Wednesday, September 28 as we get to know Alice Paul and the lasting effects of her work.

This Saturday: Fiber Arts Day! Stop by our second annual fiber event on Saturday April 30, 10 am to 4 pm at Greenfield Hall. This year’s event will include:

We will also have a special showing of antique woven coverlets at 11:30 am and 2 pm.