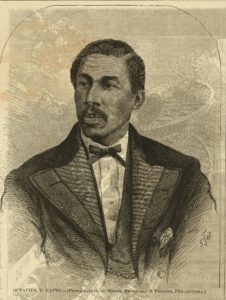 Our next general membership meeting will feature a talk by authors Daniel Biddle and Murray Dubin about Octavius Catto (1839-1871), an important educator, athlete, and equal rights leader in the years before, during, and after the Civil War.

Presented in partnership with Lawnside Historical Society, the event will be held on Wednesday September 26 at 7:30 pm at the Mabel Kay House, 24 Walnut Street, Haddonfield. Admission is free.

Biddle and Dubin helped to bring Catto’s many accomplishments to light with their 2010 book, Tasting Freedom: Octavius Catto and the Battle for Equality in Civil War America. Biddle and Dubin each had long careers with the Philadelphia Inquirer,  and both had previously created works touching on aspects of Catto’s life. After accidentally discovering their mutual interest in this remarkable man, they decided to work together to share his full story.

Catto worked as a teacher at Philadelphia’s finest black school and also was a second baseman in the Pythian Baseball Club, an African American team. Among other accomplishments, he led a successful effort to have Pennsylvania’s streetcars integrated and to have Pennsylvania ratify the 15th Amendment, which granted black men the right to participate in elections. He was murdered in 1871 by a member of a white mob while on his way to vote. Philadelphia recently honored Catto with a statue outside of its City Hall.

Please join us on Sept. 26 to learn more about this equal rights pioneer and the men and women who worked with him to change America.

May 26 Program To Discuss Brotherton Lenape Reservation in Burlington County