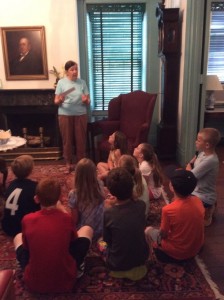 We had a wonderfully successful school season with over 200 3rd grade children from four local schools tour Greenfield Hall and learn about Haddonfield and the origins of the town. The children made their own butter, which they ate with cornbread. The kids really enjoyed the third floor nursery and play area where they learned about toys from the 18th and 19th century. They toured our tool museum in the basement and saw how early Haddonfield residents plowed their field and built their houses.

On June 10th the Haddonfield Memorial High School Art/Pottery class came to see our historical pottery collection with emphasis on the Haddonfield pottery made in Haddonfield in the 19th and early 20th century.